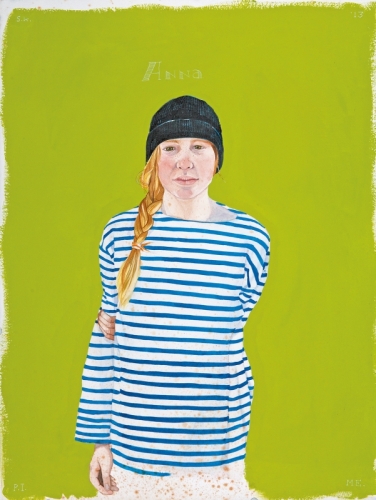 THE COLLECTION – Highlights From The Portland Museum of Art

In this image, Scott Kelley depicted himself as Ishmael, narrator of Herman Melville’s famed 1851 novel Moby-Dick, who tattooed a sperm whales dimensions on his right arm in order to visualize and remember the giant whale he was seeking.  The novel follows the ill-fated quest of the crew of the ship Pequod to locate and harpoon the formidable white whale, ending with Ishmael as the sole survivor of the shipwreck.  Kelley’s identification with Ishmael can be interpreted as the artist’s recognition of his own passionate desire to understand and depict the natural world.

Inspired by several readings of Moby-Dick and extensive historical research (including a trip to the New Bedford Whaling Museum in Massachusetts), Scott Kelley created a body of work about the whaling industry in New England.  In a series entitled Children of Lost Whalers, he drew images of children from Peaks Island, off the coast of Maine, where he has lived since 2004.  His subjects were dressed in period costume in order to portray the orphaned children of drowned whalers.  Pictures of marine life are also included in his whaling series.  This rendering of the artist’s arm is positioned on a striking back-drop of aquamarine color that appears thought Kelley’s whaling-themed works.

Though his ideas and use of color are fresh, vibrant, and contemporary, Kelley’s work has an old-fashioned sensibility.  He has even added imitation foxing, the rust-colored spotting that frequently appears over time on old documents, to his works on paper.  His painstakingly detailed realism recalls a time when artists were fixated on accurately representing the world.  Kelley’s watercolors display a remarkable attention to detail, portraying visual data that only become apparent through close observation.  He works in the tradition of naturalist artists like Albrecht Durer and John James Audubon, but with a conceptual twist.

Best known for his watercolors of wildlife, Kelley has an unusual background that places him in an artistic category of his own.  He studied at the Cooper Union in New York and the Slade School of Fine Art in London and completed a fellowship at the Glassell School of Art at the Museum of Fine Arts, Houston.  Kelley apprenticed briefly with the art forger David Stein to refine his talent for realism and worked for seven years with conceptual art superstar Julian Schnabel.  He served as an artist-in-residence at Palmer Station in Antarctica in 2003, then transitioned to making paintings of specimens from nature in a trompe l’ceil style.  AHE