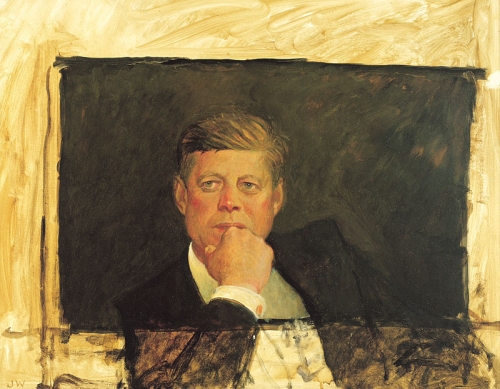 Jamie Wyeth: The Kennedy Studies is currently on view at the Farnsworth Art Museum in Rockland. Three years after the assassination of President Kennedy, 21-year old Jamie Wyeth embarked on a series of preparatory sketches for a posthumous portrait of the president known for his eloquence, diplomacy, and optimism. The challenge, of course, was not only to portray a man Wyeth never met, but also to paint the portrait of such a well-known public figure. Kennedy would have been fifty years old in 1967 when Wyeth completed the painting, now also fifty and recently acquired by Boston's Museum of Fine Arts. Several of candid pencil studies of the Kennedy brothers, and a color study of JFK made in preparation for his now famous portrait, are presented. The works will be on view until April 1, 2018.