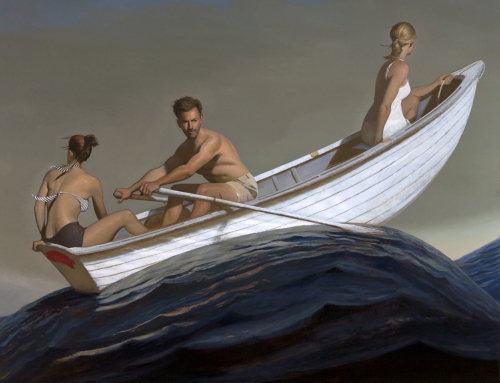 David Houston, director of curatorial at Crystal Bridges Museum of American Art in Bentonville, Arkansas, will be moving to Georgia to spearhead the opening of The Bo Bartlett Center at Columbus State University’s College of the Arts in downtown Columbus.

University officials have been planning for this day since 2004, when Bo Bartlett, a PEW fellow and one of today’s foremost American painters, agreed to help Columbus State University establish, in his hometown, a permanent gallery and learning center with a focus on contemporary art. The Bo Bartlett Center will house the largest single holding of Bartlett’s paintings, including several grand scale works such as the iconic “Leviathan.”

Columbus State University’s center will be the fourth institution Houston has helped develop and open. He was co-director and chief curator at the Ogden Museum of Southern Art in New Orleans for eight years before moving to Arkansas in 2011 to help open Crystal Bridges, the museum founded by the Walton Family Foundation, which was started by Walmart founders Sam and Helen Walton.

Houston has played a vital role in acquisitions that have shaped the Crystal Bridges collection, and he’s been instrumental in the grand opening of the museum that has attracted attendance far surpassing expectations.  He has also been the director of two collegiate art galleries, at the University of New Orleans and Clemson University, and has been a professor and lecturer of art.  He has published more than 20 articles in academic journals and has served on numerous art panels, boards and committees.  Houston will start February 1.

“To attract an individual with the credentials of David Houston to be the executive director of the Bo Bartlett Center is very exciting and positions this project to gain national attention in the art world,” said Richard Baxter, dean of CSU’s College of the Arts.

As executive director of the Bo Bartlett Center, Houston will oversee the planning and opening of the center, which has been designed by award-winning architect Tom Kundig of Olson Kundig Architects in Seattle, in collaboration with Columbus, Ga. architects Hecht Burdeshaw.  The 18,425-square-foot space on the second floor of CSU’s Corn Center for the Visual Arts, formerly a cotton warehouse, overlooks the Chattahoochee River on the RiverPark campus of Columbus State University.

“I’m really pleased to be joining a forward looking institution like Columbus State University,” Houston said. “The Bartlett Center will be a major contribution to the university and the community, and also significant to the understanding of the breadth of recent art on a regional and national level. I can’t get there soon enough.”

Among Houston’s primary responsibilities will be ensuring proper management of and care for the center’s Bo Bartlett Collection, as well as developing programs to interpret the collection and achieve the goal of producing creative work and scholarship that will enhance the public’s experience with the visual arts.

The center, originally the vision of a private collector of Bartlett’s major works, will house the artist’s donated collection of sketchbooks, journals, archives and memorabilia, offer educational programming to the community, archive access for scholars, and host exhibitions for an active visiting artists program.

While Bartlett plans to continue his artistry around the world, he has committed to spending several weeks a year at Columbus State University as an artist-in-residence.  He said the center also has garnered commitments for exhibitions and master classes from renowned artists, including Odd Nerdrum, Nelson Shanks, Vincent Desiderio, Julie Heffernan, Steven Assael, Randall Exon, Kate Javens, Alyssa Monks, and Wade Schuman.

Bartlett said he is pleased with the selection of Houston as the first executive director of the center that will bear his name.

“We are honored and delighted to have David Houston at the helm of the Bo Bartlett Center,” Bartlett said. “We’ve seen what he has done in New Orleans at The Ogden and in Bentonville at Crystal Bridges. He’ll put together an art center in Columbus like none other in the country.  He is the perfect match for the center.”

As Houston works to expand the list of visiting artists and programs for the Bo Bartlett Center, he will work with a Columbus-based Board of Advisors, as well as a National Board of Visitors that includes some of the nation’s most prominent arts supporters. Shannon Illges Candler (Mrs. Peter) is chair of both boards and Elizabeth (Betty) Turner Corn is honorary chair of both boards.

“We are building an amazing infrastructure – physically and organizationally – for a center that will be a milestone in the history of this university,” said Baxter. “The Bo Bartlett Center will create a national and international presence for the visual arts programs to add to the prestige already established in Columbus State University’s College of the Arts.