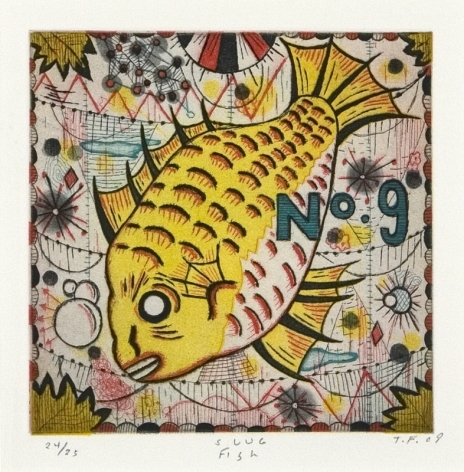 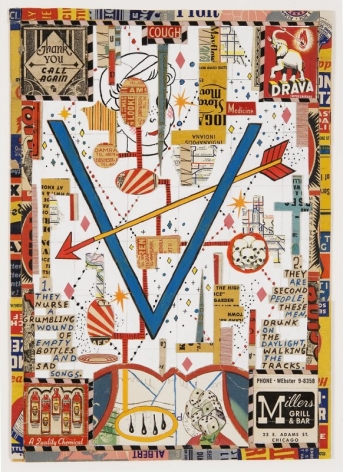 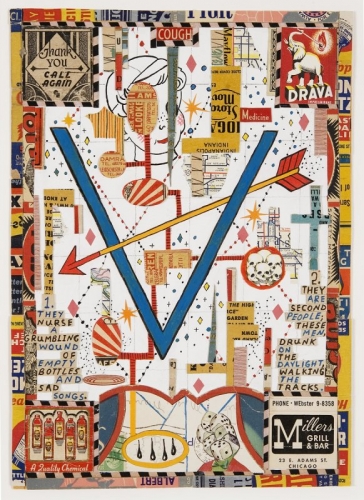 “Tony Fitzpatrick sees Chicago as others see Bombay, as a place of distant mystery and intrigue. He also sees it as many see Brooklyn, a place whose personality and character have been defined by the people who work, go to church, drink, and die there. Fitzpatrick has lived most of his life in Chicago, and although he has tried at various times to live in New York, New Orleans, and Italy, he has always come back. Chicago attracts Fitzpatrick like Marie Laurencin did Apollinaire, like New York did Whitman. It infects and inspires him. It saddens and emboldens him, and it transforms him even as he mythologizes and glorifies it” (Cartin, 2004, p.9).

The work “… is about Chicago, its people, its mysteries, its stories, and the extraordinary influence these stories have had on Fitzpatrick’s life”(Cartin, 2004, p.9). This show …”contains work informed by wide reading, an astounding imagination, a vast inventory of memorabilia (factual and imaginary both), and a profound love for the place. It comes out of Fitzpatrick’s unique way of seeing and giving life to the little things closest to him, things that most of us overlook in our daily routines. He gives us stories of fantasy and fact, of great architectural landmarks and obscure neighborhood bars, and of his own great hereoes, real and imagined. Chicago is a city of sports legends and storied politics, but it is also a city of real, everyday people, those who have made Chicago into Fitzpatrick’s Bombay and Brooklyn” (Cartin, 2004, p.9).

“… Fitzpatrick’s drawings connect the viewer physically and literally with the richness and authenticity of their subjects. These drawing-collages have the feel of reliquaries, as the formal combination of texts and images suggest mass cards and other devotional art. These pictures are not made out of what most people would consider sacred objects, but out of everyday things like matchbook covers. These advertising images are the stuff of the past, and Fitzpatrick has brilliantly arranged and preserved them in his work. Each figure floats within its own orb of symbols and references like a portrait of a saint with his or her attributes surrounded by a catechism of place, of Chicago” (Cartin, 2004, p.10).

“What Fitzpatrick seeks throughout his work is such heroes, known and unknown. He says, ‘I kind of want the original, you know, the constant. I can’t escape it. That’s what this work is for me. It’s not always about the truth of the facts, it’s just about telling the story’”(Cartin, 2004, p.14).